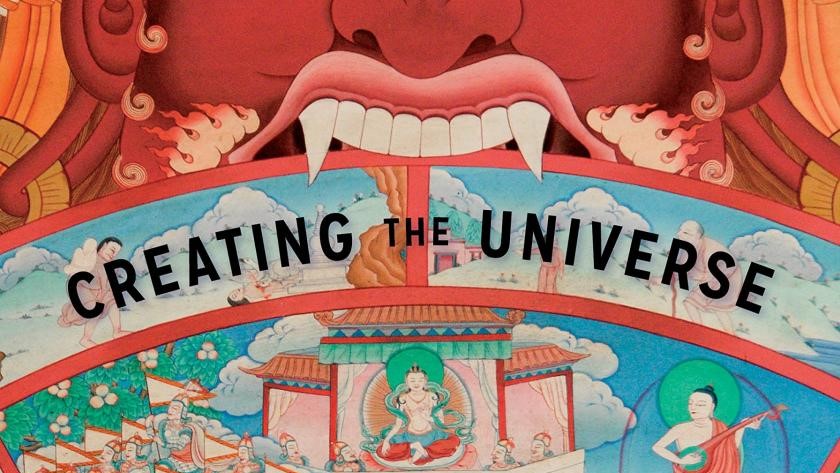 Once there was a woman who lived inside a rock. She had a husband, a desiccated, barren yogi, who also inhabited the rock and spent his days and nights in meditation, striving for liberation from earthly existence; he never touched his wife, whom he had created out of his own imagination. The woman, “like a lotus burnt by frost,” was weary of this loveless life; she, too, sought release. One day a great sage, Vasishtha, wandering through the wilderness, heard the woman singing a sad and gentle song; he followed her voice and found her sitting outside the rock. She introduced herself and told the sage her story.

She also taught him how to follow her into the rock. This took some practice—at first Vasishtha could see only the rough stony surface. Eventually, he was able to enter into the deep, open spaces inside. There he saw endless worlds folded within worlds; every atom contained millions of interlocking universes. Vasishtha watched as these universes all came to an end in a catastrophic fire, in which the woman and her husband also perished. Profoundly unnerved, Vasishtha resumed his travels, still searching for truth. Life, he concluded, is a strange affair, always full of surprises.

Was this rock meant to be thought of as a real object, occupying some defined space in a familiar cosmos? Yes—at least as real as the pictures of the cosmos that Eric Huntington discusses in Creating the Universe, his masterful book on Buddhist cosmology. The story of the rock comes to us in a Kashmiri Sanskrit text, perhaps from the tenth century, known as “The Way to Freedom” (Mokshopaya), which stands at the center of an astonishing collection of metaphysical narratives called the Yoga-vasishtha that seeks to prove to its readers that reality is internal to our minds. This mind-born texture of existence includes capacious, elastic, expansive rocks that can open up to reveal an infinite set of overlapping and mutually embedded worlds.

Such a cosmos can be mapped in minute detail. Huntington’s book is a lucid study of the cosmograms that South Asian cosmographers, architects, ritualists, and artists produced over many centuries, with particular emphasis on the colorful visions of Mahayana Buddhists in the eastern Himalayas, including Tibet. South Asian cosmology has been explored by earlier scholars such as Willibald Kirfel, Paul Mus, and, more recently, the anthropologist Robert Levy in his book on the Nepalese Newars,1 but Huntington’s work excels in the range, precision, and depth of his understanding. His book is lavishly illustrated with artistic versions of the Buddhist universe and with stunning photographs of ritual models of it created from colored sand and stone. Once, in Ladakh, in the western Himalayas, I saw an intricate and beautiful model taken apart by Buddhist monks…